Metalcore, Y2K, and upcycling — a Nordic dispatch from Pitti Uomo 103

We dug deep to highlight the best Nordics fashion initiatives and collections for our yearly visit to Pitti Uomo in Florence. 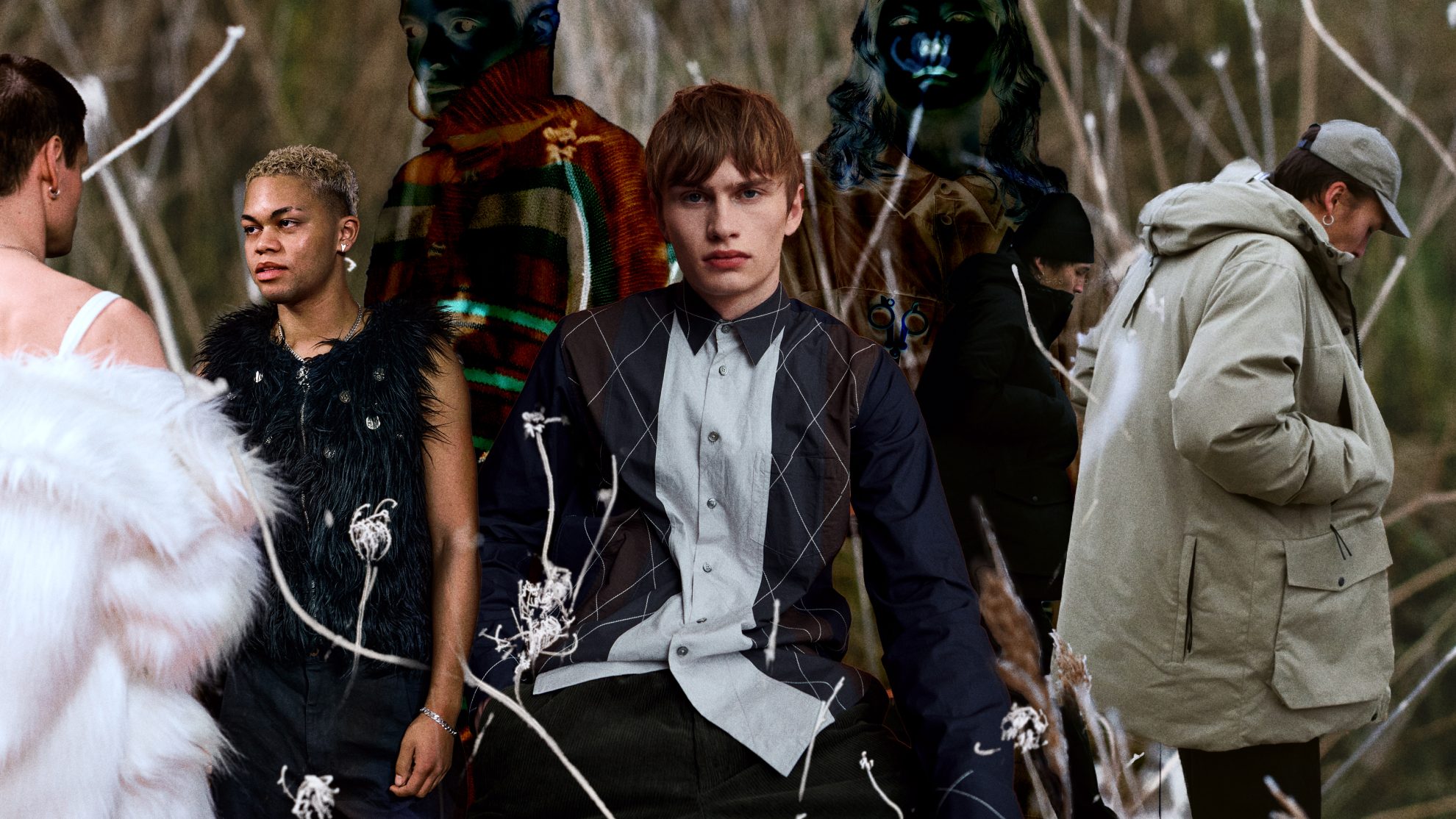 The international trade show is a platform for brands to present themselves on the highest level, with top players in the industry always present. This edition was the 103rd and presented 789 brands from all over the world, that showcased their upcoming collections. Among these, we found some Scandinavian nuggets that performed particularly well.

The Finnish designer Rolf Ekroth, often rooted in nostalgia, instead explores the world around him and his place within it for his fall 2023 collection. The collection is titled Galen Värld (Swedish for crazy world). Ekroth came up with the name while listening to the Swedish rapper Einár and the song Koppla Av, in which the artist has a line where he describes that we’re all living in a crazy world. Ekroth, however, wants the collection to be a reflection that would work as a sort of comfort and that we still could find beautiful things in the world. Which, in fact, could seem crazy while watching the news and being confronted by the ongoing — political, environmental, and economic — problems in the world.

The collection also included elements from the Finnish company Fiskars. Being Finland’s oldest company, founded in 1649, Fiskars produces utensils from gardening to cooking, and everything in between. Within fashion, the company have become most famous for its scissors to cut textile. Something Ekroth took hold of when creating the collection’s key look; the survival suit. Made as a patchwork out of leftover swatches, the scissors enable to cut the swatches open to reveal the garment in a new style. This technique also goes for the chore coat in the collection, inviting the wearer to experiment and create their own version of the garment. ”Even though the background of this collection is dark; this is the most colourful, innovative and creative collection I have ever made”, Ekroth comments. This goes in the intricate macramé detailing, the soft reindeer leather, and the colourful, but muted, palette in the collection.

Ekroth’s design colleague and compatriot, Jimmi Vain, staged its debut runway show with his eponymous label, VAIN. The show, part of the ”Palazzo Finlandese” series, took place in the grandiose Palazzo Pucci. Earlier this spring, the brand made a lot of noise when it launched its collection made out of upcycled McDonald’s uniforms. For the show in Florence, Vain opted for a more nuanced, and elegantly curated look.

For the collection, Vain fetched his inspiration from nostalgia, looking back to the early 2000s and the pre-internet era. Especially looking at musical genres and their subcultures, as well as his own experiences, the collection is rooted in rap, metal, and nu-metal culture. It takes its shapes through distressed denim and flowing leather coats. In the show, models gathered in the centre of the hall, in what seemed to be a teenage room, playing Tony Hawk Pro Skater 3 and reading magazines — common themes in an early 2000’s teenage room.

Technicality and function keep being two elements that are coming out strong from the Nordic region. One of those brands is the Norwegian outerwear brand Blæst, based in Ålesund. A small city on the west coast of Norway, nestled beneath mountains and spread out among different islands and fjords. Due to its closeness to nature and shifting climate, there is no surprise that Blæst is producing technical garments to meet the challenging conditions in its home grounds. The highly technical gear comes with a sleek design, that will make the gorp heads ready to have a blast either in the mountains or the city streets.

A post shared by Atlas Works and Days (@atlas_works_and_days)

The love for function and technicality was also found at Atlas Works and Days, which did its first-ever presentation at Pitti Uomo. Founded by Raff Godfrey, earlier Head of Menswear at Norse Projects. The design from Atlas Works and Days is based on vintage garments, such as military and work wear, that are updated to contemporary standards and cuts. Produced in carefully selected fabrics like waterproof Ventile of organic cotton and Primaloft merino wool.

Incorporating technicality into our daily lives was a recurring element among the brands at Pitti Uomo this year (actually, it has been for the last couple of seasons). It was with this exact approach the Swedish brand Gaston Luga was founded. The founders, Jonas Wistrand, Johan Gawell, and Carl Sundqvist, felt the need of having a practical, yet stylish, way of carrying your daily essentials. The brand was born out of backpacks but is today producing a range of different bags, in waterproof, sustainably-sourced, no-animal-based materials.

Besides technical gear, we found brands from Scandinavia that dives deep into craftsmanship. Jan Machenhauer, from Denmark, presented its very elaborate shirt range. The shirts are designed in Copenhagen and manufactured in India. Produced in close collaboration with local tailors — Machenhauer visits India twice a year — the shirts are made with techniques that are most often found in haute couture.

Another Dane, Fredrik Berner Kühl who is an alumni of the fashion school Polimoda in Florence, returned to well-known Florentine grounds to present his fall 2023 collection. His design-ethos is rooted in the research of high-quality fabrics, which is equally technical and luxurious. The balancing of traditional garments, such as tailoring, with more technical pieces, creates a wardrobe which is balancing modernity and timelessness.

At Pitti Uomo, one of the most interesting sections is the one focused on up-and-coming brands. Named S|Style, the section features invited brands that address sustainability in new, unconventional ways. This season featured two Scandi-participants. The Danes at ISNURH, who was a Pitti-debutant, and Waste Yarn Project, led by the Norwegian designer, Siri Johansen.

Founded by childhood friends, Oliver Abrenica and Kasper Juhl-Todbjerg — ISNURH rooted in street style-oriented fashion inspired by their daily lives in the Danish capital. With sustainability in mind, they’re working with deadstock-fabrics and to reduce their waste to an absolute minimum. Their pants and shirting, that is made out of Lenzing-certified Tencel, are produced in Copenhagen by a highly technical manufacturing process that allows them to produce without any water and waste fabrics.

Johansen of Waste Yarn Project keeps evolving the innovative ways how you could make use of unwanted yarns. In the new Dice Knits, each colour is determined by the knitter who throws a dice and then the numbers decide which colours and patterns the knit will be having. The look takes inspiration from Hønsestrik, a revolutionary knitting technique that was popularized in Scandinavia by Kirsten Höfstätter, during the 1970s.