How Berlin Fashion Week pushes the boundaries of a traditional format

One of the most common words to describe the city of Berlin is progressive. During the week, the city and its fashion scene invited visitors to experience progressiveness from different angles — come political statements, fashion aesthetics, or technological innovation. 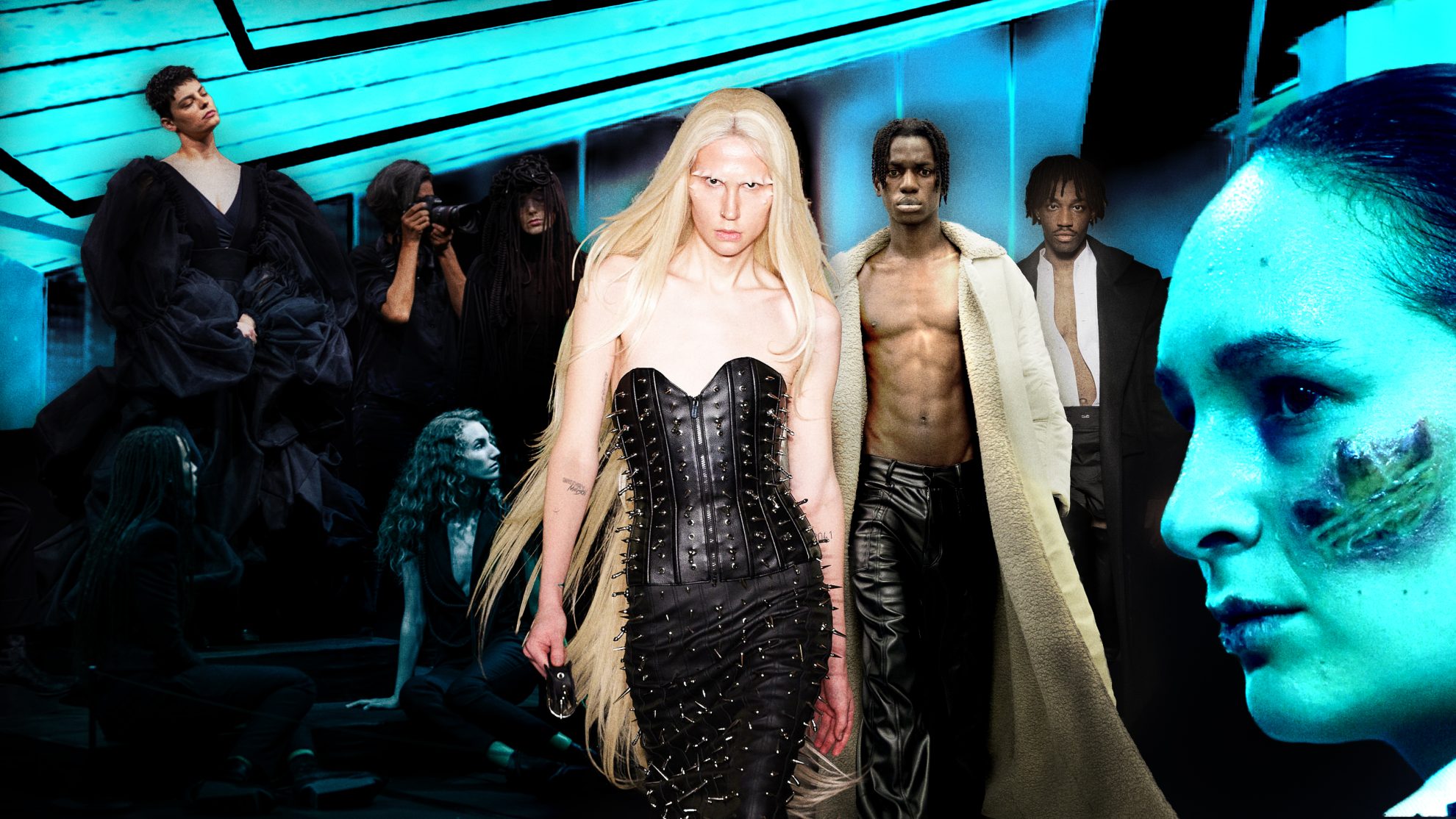 The week started with a bang on Monday morning. In a last-minute change in the schedule and an announcement from, what appeared to be adidas, in which the german sportswear brand declared they wanted to ”flip the script on power in the garment industry”.

On Monday evening, a staged adidas event took place in central Berlin. At the event, a speaker, who presented himself as the creative director of adidas, welcomed the audience and declared the brand’s new plans. He then announced their newly appointed co-CEO, a former Cambodian garment worker, signing an agreement on working conditions, establishing a severance guarantee fund, and paying money owed to workers. After the announcement, a fashion show took place. Models, visibly mistreated, walked the runway in distressed, upcycled, adidas-clothing. Supposedly, co-created with musicians — and real adidas-collaborators — Bad Bunny, Pharrell Williams, and Philllllty.

What on the surface appeared to be a real action from adidas, was instead a spoof and action campaign orchestrated by Threads and Tits, The Yes Men, and the Clean Clothes Campaign. ”The news of their game-changing ethics programme is sadly fake, but the suffering of adidas workers is all too real,” explained Jeff Walburn from the activists The Yes Men. adidas denied all involvement shortly after the stunt.

Otherwise, the fashion that was being presented on the runways are reflecting the spirit of Berlin. Forward-thinking, open-minded, creative and conscious.

Sia Arnika, a Berlin-based danish designer, presented with her eponymous label a collection grounded in a futuristic outlook. Produced out of dead stock and sustainable materials such as Circulose®, the garments are given a sci-fi look and often slashed to further strengthen the concept.

Esther Perbandt, a former finalist of the designer casting show ”Making the Cut”, invited visitors to a phygital, mixed media fashion experience. The designer’s goal is that in ten years be fully sustainable and the show was one of the steps toward it. In the presentation, visitors entered a dimmed room, where 3D projections of the garments were found. It was later complemented by a physical presentation, encompassing the designer’s vision between tailoring and digital innovation.

In Perbandt’s collection, each garment is coming with an integrated microchip connected to a blockchain, in which the whole supply chain could be found. A technology made by FFBS — Fashion for Biodiversity Solutions. The FFBS-ID provides a biodiversity assessment of each garment and measures their commitment or roadmap towards the Sustainable Development Goals (SDG) and readiness for the EU Circular Economy Action Plan

SF1OG, with designer Rosa Marga Dahl, combines exquisite tailoring with sturdier materials, such as leather and denim, as well as an experimental, genderless design. One of the brand’s principles is to only work with dead stock materials. The AW23 collection, named ”Artifact”, is inspired by vintage photos found in antique shops, merged with the forward-thinking design ethos.

Namilia presented their collection, ”Cruising Utopia”. The show notes state that ”the Internet has revolutionized queer life” and the collection envisions the liberations this new queer renaissance can bring. Heavily infused with motorcycle-inspired fashion (the collection features a capsule collaboration with Electronic Arts Inc. and the Need for Speed franchise).

The two trade shows, Premium and SEEK, returned to the german capital and were organized in tandem with the Berlin Fashion Week. Earlier, Premium and SEEK had plans to move to Frankfurt, and create a new type of fashion week, in which technology and sustainability were supposed to be highlighted. As for many, COVID disrupted the plans, and Premium and SEEK are staying in Berlin, as they celebrate their 20th anniversary.

— The last two and half years have been extremely challenging, especially for us, trade show organizers. We had a short stint in the summer, but now it feels like the whole industry is coming together again. It’s important to have neutral platforms where everyone can exchange their ideas, explains Jorg Arntz, Managing Director of Premium and SEEK.

Even though the geographical move never happened, the fairs remain, somewhat, true to the topics of sustainability and tech. The planned fashion tech conference needed to be postponed until the next edition. A decision which according to Arntz, had to do with a descending interest in technology. ”We see now that people are coming to these shows to actually shake hands again, this is a people’s business. The content is priority number two when they come to the shows”, and he continues ”it’s hard to come up with new, innovative topics. There’s a lot happening in the tech world, and sometimes it’s too early to actually get the right people to understand what we’re talking about”.

Around 150 brands, that could be considered sustainable, were exhibiting at Premium and SEEK under the theme Conscious Club. Under the same roof as the trade shows, we also found the sustainability conference, the 202030 – Berlin Fashion Summit. The conference invited speakers, stakeholders, brands, and NGOs, to discuss the pressing issues within fashion and collectively find solutions under the overarching theme, “Active Alliances for Positive Fashion”.

Nicks Ericsson, Senior Director, Brand Purpose at UGG, was invited to discuss regenerative farming and their partnership with the Savory Institute, a non-profit that facilitates large-scale regeneration of the world’s grasslands.

— At UGG, we recognize the important part we have to play in protecting our planet for future generations. We are taking steps to reduce our environmental impact but also explore ways to reverse environmental degradation, Ericsson commented.

Max Gilgenmann, the founder of the sustainable communication consultancy, Studio MM04, and one of the organizers of the 202030 – Berlin Fashion Summit, explained the complex nature of fashion and sustainability, which the conference is helping to sort out.

— From my perspective, sustainability is still a niche. But, at the same time, it has become mainstream. It’s a sort of weird contradiction. Everyone is talking about it, but next to nobody has an understanding of what it is and what to do.

Even though the sustainability discourse has been taking a bigger place in fashion, Gilgenmann explained how fashion sustainability often has been centred around greenwashing and misleading communication. Something he predicts will be less common, due to upcoming legislation and demand for scientific facts. Gilgenmann also points out that sustainability is currently in a moment of change, thanks to new driving forces.

— Bigger change in society takes generations. So, if one looks into that and the different phases sustainability has been through, we’re now in the fourth, or fifth, wave. I feel it needs something different, I’ve seen two waves in the last 10—15 years. Now there are actually players — often singular players, who are finding new alliances — who really want to do and are capable of doing it. Those players are ready now, so I’m expecting a relevant change in the coming years.

Change was also the major spirit at the fashion tech conference Yoonaverse. Organized by the Berlin-based, tech start-up Yoona.AI. One of the goals of Yoona.AI — which is founded by Anna Franziska Michel and usually works with AI-driven fashion design — is to change the back end of the fashion industry. A goal that Michel realized wasn’t possible on her own and led to the founding of Yoonaverse. The conference was co-hosted with H&Mbeyond, H&M’s retail innovation studio, based in Berlin. ”Competition drives business, cooperation changes and that is exactly what is needed in the industry”, explained Anne Wolthaus, Innovation Lead of H&Mbeyond. The conference brought together corporations, tech start-ups, innovators, and universities to make a change together.

The hybrid conference took place physically in Berlin, as well as the newly developed Berlin Metaverse. In the virtual world, visitors were able to listen to panel talks, enjoy exhibitions and follow the fashion week schedule with live-streamed shows.

— My goal is to create an event, that makes Berlin known as a fashion technology city. This is my goal and the reason I bring everyone together. In this community, we can change the industry together.

The conference was built upon different rooms and topics in which different stages of fashion’s value chain were discussed, such as design, production, logistics, marketing, and so on.

— Each of these parts needs to be changed to make it [fashion] holistically sustainable. But I think we need technology to change it. With technology, we can make a change and have holistic sustainability in our industry. We bring start-ups and companies together, to find a solution in every part of the value chain, Michel says.

One of the most discussed topics during the conference was Web3, the Metaverse, and the digitization of fashion. One of the speakers who addressed the topic was Karl Nowak, Senior Business Developer at World Wildlife Foundation Germany. Coming from another industry, Nowak shared experience and gave inspiration on how to use technology in new, innovative ways.

Nowak has been part of developing the Web3 and Metaverse projects for WWF. Being one of the first NGOs to enter the Web3 space, when WWF launched an NFT collection called Non-Fungible Animals. A collection of artworks depicting ten, almost extinct, animals. In 2022, they delved deeper into the space when they released a virtual world, in tandem with the Berlin-based, tech company,  Journee — A SaaS company that’s developing virtual worlds.

— With WWF, my goal is to reach new target groups that we usually don’t reach, such as Gen X, Y, and Z. When NFTs popped up, you had only NFTs used in a way that made money basically out of nothing. It was not about the art, nor about the technology. It was made to make money and not see any utility in that. What I wanted to do is first of all to raise awareness, and raise money for WWF’s different projects, Nowak explains.

The projects done by WWF have generated over $300 000 to WWF and made good use cases in which new technology could be implemented in new ways. ”We were having utility before it was a buzzword at the beginning of last year”, Nowak comments and continues,

— All these buyers came to us because we reached them in a new way. Not because they were leaving the subway and there was someone from WWF, with this yearly contract to save the tiger. It’s a completely new target group and it works very well. 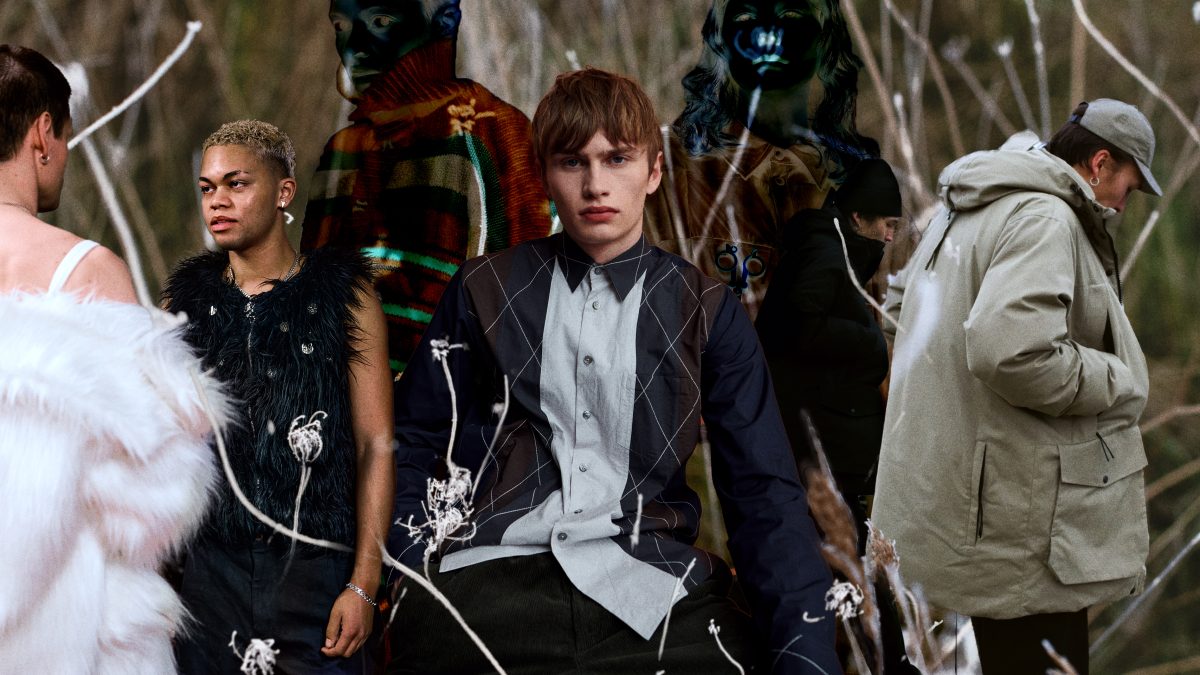 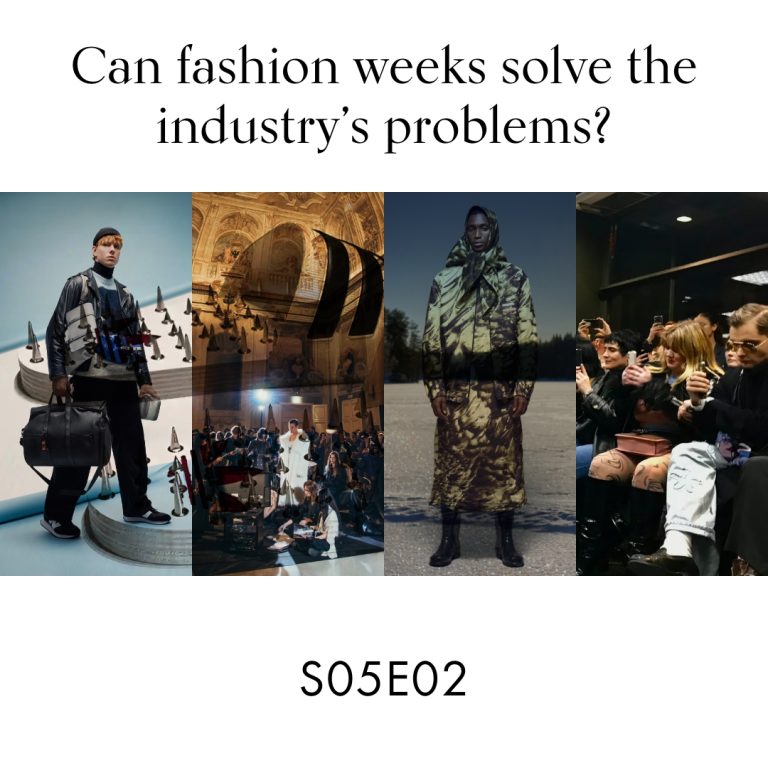 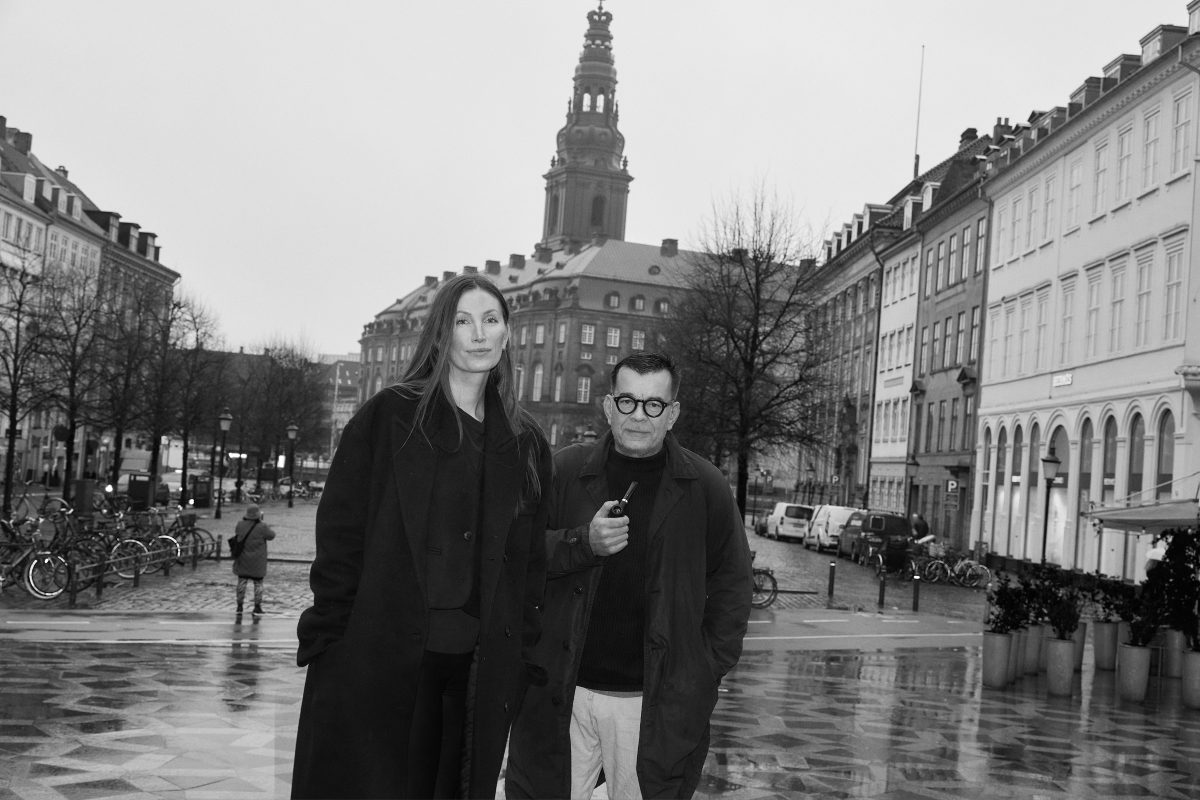